American Corn Based Products - Eat Up! 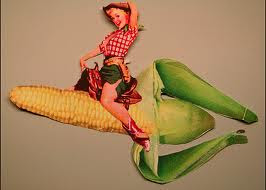 God Bless America and all the products that are derived from corn! The United States is the world's largest producer and exporter of corn. America is also the leader when trying to feed the world. We're most generous when it comes to food trade.

We all eat, use, wear and basically live corn every day. Corn is 'the' wonder crop of the world particularly the Americas. Instead of playing 'I Spy With My Little Eye' game... try playing 'I Spy Corn!. Whether you reside in an industrial city, artsy fartsy neighbourhood, suburbia, Manhatten or Alaska.


You get the point. Not only is America an icon regarding corn production and agriculture around the world.. . but, we're also leaders in corn based products that basically keeps the world trucking along.

It's true. On September 23rd, 1959 Soviet Premier Nikita Khrushchev and his friends had made a visit to Iowa to learn more about the American corn industry and agriculture.
Premier Khrushchev actually had a good ol' American friend from Iowa who was a corn salesman. Roswell Garst had invited his friend to learn more about cutting edge American agriculture technology. The event drew thousands of people, reporters, G-men dressed like farmers etc.
It seems that Russia was experiencing an agricultural hardship and welcomed American ingenuity.
Corn is easy to grow and very delicious to eat. I don't know of any backyard gardener that doesn't have a block of corn growing in their garden. There are hundreds of corn variety from sweet to basic field corn. Indian corn (also called flint corn, Makki, Bhutta, makka etc.) is a wonderful decoration and even more importantly a great source of protein when ground up for flour.
If you've never eaten foods made from ground Indian corn as like tortillas, biscuits, Indian corn stew, pudding, flat bread etc.. . well then, you should. They're foods that are part of the American fabric which was once our identity in America.

We went from being a corn culture to a processed food society. Folks would rather eat a ding don zinger before eating corn.

Society was told during the 1990's that corn is bad for you. Hundreds of generations of cultures have survived off of corn. Now scientists are stating that their is an enzymes and hormones in corn that actually helps weight.

Corn is a carbohydrate and it's loaded with energy and nutrients. Eaten in moderation without a lot of butter can be a nutritious food source.

Don't confuse hole corn with corn syrup or high fructose corn syrup when eaten in bulk can lead to diabetes and obesity. Hole corn is full of fiber which will make you feel full as well as make you 'regular'.

Corn is an American national symbol during holidays, Native Americans, States, iconic products made by General Mills or Kellogg, we decorate with corn stalks and cobs, we celebrate by making candy corn to eating corn on the cob and drinking fine corn distilled liquors.

Native Americans taught the early settlers how to plant the three sisters which included corn.

Corn is All-American and feeds the world and many animals. There's nothing more beautiful and delicious than a fresh ear of corn either BBQ'd, boiled, microwaved or baked. It's your American birthright to enjoy corn. So eat up!