How to Grow Potatoes - Southwest Gardening 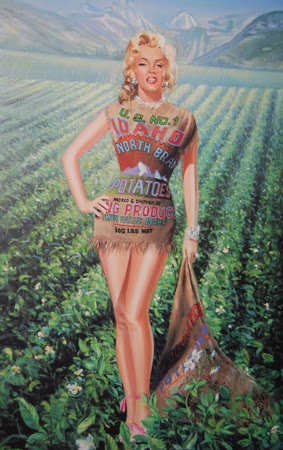 Idaho potato advertising goes old school with pinup models in potato sack dresses — from an exhibit at the Prince Edward Island Potato Museum in Canada. This gal looks a bit like Marilyn Monroe to me. Awesomesauce!

Potatoes Are Easy To Grow In Ground or In Containers

There's nothing nicer than eating a fresh potato. Fresh harvested potatoes are nuttier, buttery, and less starch tasting than potatoes that have been harvested, shipped and moved from one packing house to another before it even makes its way to a grocer.

Potatoes of all varieties grow just about anywhere; though, some don't like too wet of soil or too dry. It's all about trying to find the right variety of potato for taste and easy growing. Potatoes are easy to grow and they pretty much grow themselves. There's no pruning, pinching back or staking as like tomato plants.

I've found throughout the years that growing potatoes in the desert / arid conditions is easiest when grown either in containers or using the hay method. There's no digging holes, taking up needed space or mixing and amending soil conditions. My biggest battle with growing potatoes in the ground are battling gophers. For some reason gophers in my neighborhood are more attracted to potatoes than sweet potatoes and other root vegetables like beets. I never have a problem with gophers and my Detroit Red beets or Purple Top turnips.

The benefit to growing potatoes in a container is that when it's time to harvest the potatoes, you simply knock over the container on a tarp and pick up your potatoes. You can then reused the soil. The tarp makes it easy to re-purpose the soil.

I've learned never to reused the container dirt for growing potatoes for growing tomatoes. Both are from the same family called nightshades and if your potatoes have a disease then the tomatoes that you planted in the          same soil will most likely be effected by the disease.

I was raised with growing potatoes in the ground to growing in potato bags or 10 gallon buckets. When the season was predicted to be too wet, we used containers to grow potatoes.

Growing potatoes in the southwestern dirt is easy. Simply bury or cover the potato with soil, hay or even shredded paper. As the plant grows (about every four inches), cover the leaves again. Allow a bit of the leaves to peak out for faster growing. Keep the soil moist but, not saturated.


Potatoes are American - of the Americas

The Potato was first cultivated by the Inca Indians in Peru, in and around the Lake Titicaca region of the Andean Mountains about 200 B.C.

In 1537. The Spanish Conquistadors discovered the Potatoes while raping and pillaging South America. Besides taking potato varieties back to Spain, they had also taken gold, slaves, cacao and fruits.

The first documented potato in North America was in the year 1621. What was once a delicacy for the wealthy are now one of the largest and most beloved food crops in the world. According to USDA, about 50 percent of the potato food crop is processed for French fries. God bless farmers! 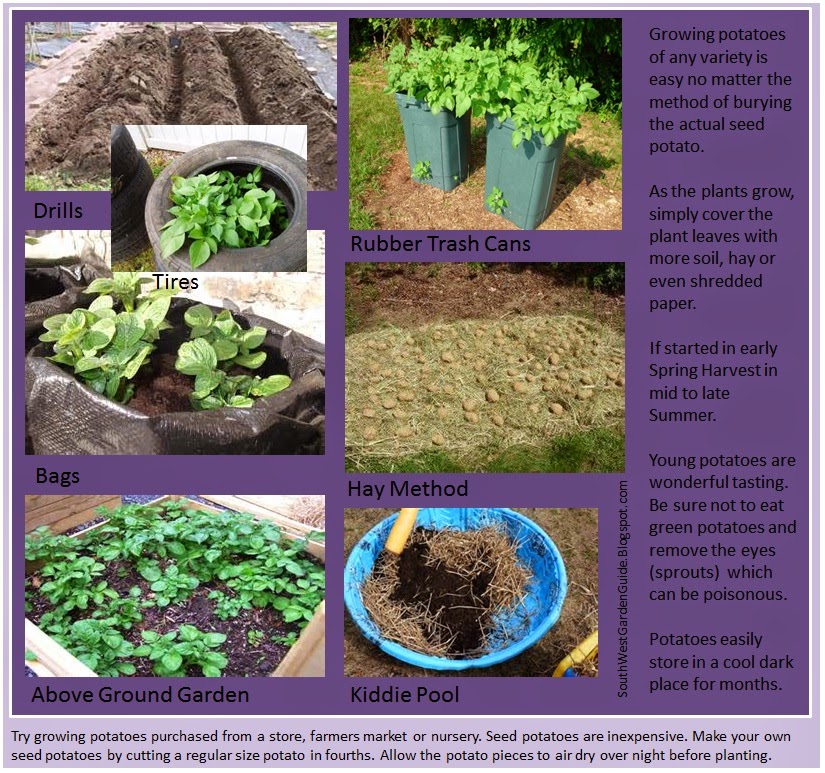 Potatoes require full sun to grow. They're aggressive rooting plants and will produce the best crop when planted in a light, loose, and well drained moist but not wet sandy loam.

Potato crops should be rotated every 3 years. This means that you should change the soil or move the bed to another spot; otherwise, disease could set in or all of the nutrients can be depleted.

Potatoes can be grown indoors. Be sure to keep the soil about 55F or more. I've seen other gardeners living in snow bound regions keep a heating pad set on low underneath a potato bag. Place your container indoors near sunlight. This will urge the plants to grow up and out.

Growing a potato is as easy as digging a hole and dropping in the potato seed or making a bed of hay. 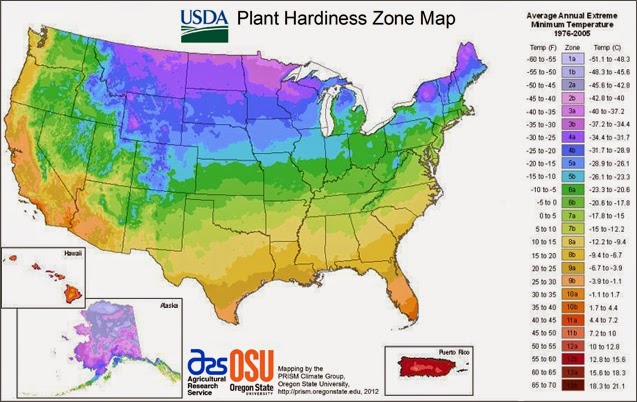 I grow potatoes in USDA Hardiness Zone 8B and 10. I'm lucky to be able to grow potatoes all year long. We have extremely long growing seasons here in southern California.

Sweet potatoes are a little more delicate to grow year round than potatoes. My favorite varieties are Norgold Russet, Red La Soda, White Rose (Commonly grown in Ireland). The trick is to plant them in intervals.

I start Norgold Russet in early Spring, Red La Soda in July - August, then I plant White Rose in September.

Planting In Rows or Mounds?

You can bury potato seeds 6 - 8" deep in rows or mounds but, I've learned from my own experience and from the advise of Master Gardeners and neighbors that potatoes will definitely grow in the southwestern sandy loam but, it's best to grow in containers or beds of hay.

Gophers are notorious in southern California and they seem to be able to smell potatoes a mile away. It's easier to harvest and control water by growing in a container of some sort. You can grow 10 pounds of potatoes in a large growing bag or bucket.

Each root will produce potatoes. The more roots, the more potatoes.

For hardy plants; start with good soil. You can use your own dirt and add manure or water with miracle grow every now and again to keep plants fertilized.

As the plant grows you'll need to keep covering it with dirt or hay. I recommend allowing the plant to peek out at least 4 inches before covering. As you continue to cover the plant, it will produce more roots which equal potatoes.

For the maximum crop, keep your potato plants well watered particularly if planted in a container. The soil or planting material should be kept moist but not saturated particularly during the period when they are in flower and immediately thereafter. That is the time when the plant is creating the new tubers, and water is critical.

Water early in the day if you can so that the foliage has time to dry completely before evening. Wet foliage can make your plants more susceptible to potato diseases or can damage the leaves.

If you notice that the potato foliage is turning yellow and starts to dies back, discontinue watering. Your plants are telling you that it's about time to harvest. Slow down on the watering and allow the tubers to mature for a week or two before harvesting.

Once the vines have passed the critical watering stage while in flower, they will tolerate a certain amount of drought. This is called hardening off. According to some studies, non-irrigated potatoes are less watery and more healthful.

It's best to water by hand and to be on a regular water schedule. Potato plants that aren't watered regularly will produce a much smaller and fewer potatoes.

You can begin to harvest your potatoes 2 to 3-weeks after the plants have completely finished flowering. At this time you will only find small "baby" potatoes if you were to dig up a plant.

Potatoes can be harvested any time after this, by gently loosening the soil with a spade or shovel. Using a pitch fork often ends in tragedy. I've lost many potatoes using a pitch fork.

While harvesting, loosen the soil then reach under the plant, and removing the largest tubers, leaving the smaller ones to continue growing.
If you want late potatoes for storage, wait 2-3 weeks after the foliage has died back then carefully begin digging a foot or so outside of the row or mound.

Remove the potatoes as you find them. (Be careful not to bruise or cut the tubers with your spade! It's easy to do) If the weather is dry, allow the potatoes to lay on the soil surface, unwashed, for 2-3 days so they can dry. If the weather is wet, or rain is expected, move the harvest to a cool, dry area (like a garage or basement) for the drying period. This drying step is necessary to mature the potato skin, which will protect the potato during storage.
If, by the end of September, the plants have not begun to die back, all of the foliage should be cut off to ensure your crop has ample time to mature before winter. Store your undamaged potatoes in a well-ventilated, dark, cool (about 40 degrees) location. Properly dried and stored potatoes should keep well for three to six months.

It's easy to harvest using a container. Simply overturn the container onto a tarp, sheet or newspaper. Pick out the potatoes for drying. Re-purpose the soil.

Have fun with trying different potato varieties. For fun, the next time you have an extra potato, cut it into 4 - 6 pieces. Allow to air dry overnight and plant in one of those fabric store bags using potting soil. The handles make it easy to hang or you can simply put it aside anywhere there is enough sunlight. You'll be amazed as to how many potatoes will grow in a large sized fabric bag from Walmart or your grocery store.